Night number six in the tent was the first night I was able to fall asleep within minutes of my head hitting the pillow.  I had happened upon a campground as I was riding by Soap Lake in Washington and stopped in on a whim and found a great little spot near the edge of the lake.  The miles I rode after leaving Lolo Pass were for the most part pretty flat and straight and they reminded me of Euclid's first postulate.  That's how these rides go.  You ride for hundreds, sometimes thousands of miles to get to legendary riding routes that are often only twenty or thirty miles long.  US129 - the Tail of the Dragon in North Carolina is one such route.  Its claim to fame is 118 turns in eleven miles.  It's a great run, but it's over in thirty minutes.  I spent a day running the Tail back and forth before learning that there many other routes in the area that are just as exciting.  I suppose one could view life in the same way,  We work months, sometimes years on end, only to take a short vacation if we're fortunate.  Parallels can be easily drawn.  But I digress. 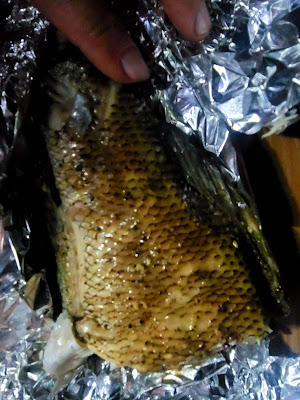 I was hanging out next to my tent last night writing on this blog when the people from the campsite closest to me walked into their camp with a stringer of fish they had just caught.  I overheard them passionately discussing something in a foreign language and gesturing as if they were discussing the weight of their catch.  I decided to be the friendly Texan and grabbed the luggage weight from my trailer that I use to measure its tongue weight and offered it to them.  For the record, the average weight was around three pounds.  They appeared very grateful and although their English was poor, they told me they were from Kazakhstan.  They pointed at my Texas t-shirt and the man said "love Texas". The woman started cleaning their catch and I departed through the trees back to my camp.  A while later, they both appeared through the trees at my table and the man said "Texas!" I looked up and they had brought me dinner...a fish filet.  Many know I am not a fish guy, but I graciously accepted it with a smile.  It was a kind gesture for which I was genuinely appreciative.  Then they just stood there, clearly waiting for me to eat it. It was excellent.  I have no idea what kind of fish it was, but it was a flaky white meat and I actually ate the entire filet.  We talked to the extent we could before she grabbed his arm and led him back through the trees to their camp.

I packed up camp this morning and while performing a cursory inspection on Hester, discovered that Pearl's license plate was missing.  The mounting bracket apparently had snapped somewhere on the previous day's ride.  I have no idea what to do about it and I just hope I can explain it to any law enforcement officer who might see it and pull me over.  I have the tax receipt and a photograph of the plate (all of my vehicles' plates, actually) that I could show an LEO if asked.  I'll just do my best to not draw attention to myself on the road and hope for the best.  Because, you know, a bright red Harley pulling a trailer adorned with a solar panel is a common site these days. 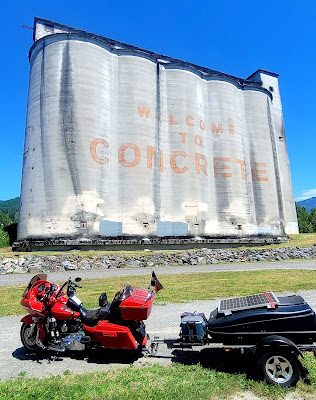 Today's ride would take me into northwest Washington via WA17, WA97, and finally a hundred or so miles across the mountainous WA20, and across the Deception Pass bridge into Oak Harbor.  It was a great day with cool temperatures and routes that took me passed apple and cherry orchards, through tunnels, over mountain passes, and around many high altitude lakes and waterfalls.  It was only a little over 300 miles and it raced by. 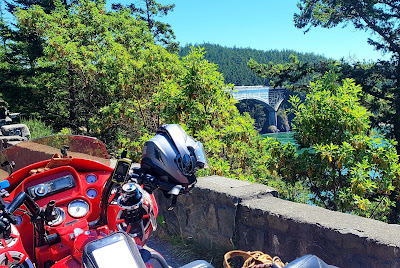 Crossing the Deception Pass bridge was bittersweet.  It's a place that holds special memories for me. What's also special is I get to sleep in a real bed tonight!  My mother had a place up here and one of her close friends still lives in the home across the street from what was my mom's place.  It was strange to park the bike so early at 2:30, but it was nice to not have to unpack the trailer and it's been a great afternoon reminiscing and looking at pictures of mama and her friends here.  Did I mention that I get to sleep in a real bed?

I'm seven days and 3,115 miles into this trip with another eleven days and 4,000 miles to go by the time I get home. I've ridden north from Texas to Montana and west to Washington   On Wednesday, I'll turn south and begin making my way along the coast to California.  I'm on track to camp somewhere near Yosemite National Park and hit Lake Tahoe. 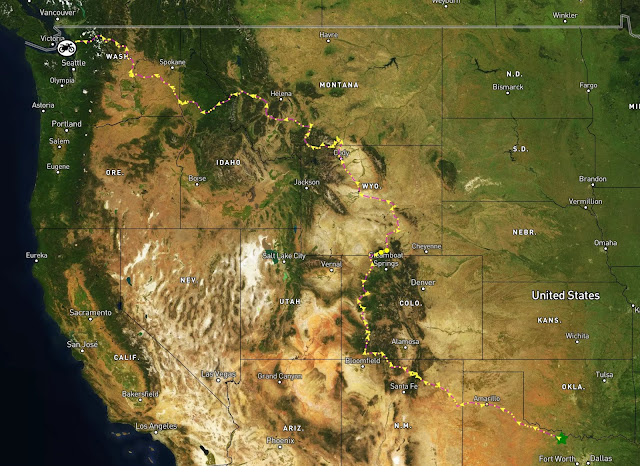