I wrote previously about building a trailer to pull behind Hester for motorcycle camping.  I picked up a shell of a trailer built by a friend of a friend.  It had good bones and I set out to realize my vision of the perfect motorcycle travel rig.  The eight-inch wheels and bias ply tires were replaced with twelve-inch mags and radials.  Larger wheels spin slower and less and therefore inflict less wear and tear on wheel bearings. Of course, this meant I had to install larger fenders to accommodate the larger wheels. I added a pair of twenty-pound hydraulic strut lifts to hold the clamshell open while I’m loading, unloading, or just digging around in there.  I added surface level D rings in the base of the clamshell, to which I can attach bungee cords that serve to secure cargo while I'm on the move.  I extended the tongue eighteen inches, which moves the clamshell back more from the motorcycle to provide a more stable towing experience and to make load distribution more forgiving.  Load distribution is paramount when pulling a trailer, especially with a motorcycle. The elongated tongue bar gave me room to mount an ice chest holder in front of the clamshell.  Finally, I added a removable 100-watt solar panel to the roof.  This panel charges a small integrated inverter/generator that stores inside the clamshell.  The panel and generator combined weigh less than 25 pounds!  With this rig, I can charge the generator while I ride all day and have multiple 110VAC power outlets and high-speed USB ports for charging my electronics at night.  I had already outfitted Hester with a trailer hitch and wiring for the LED trailer lighting.  Although I haven’t weighed the finished product yet, the entire fully packed and properly balanced rig can be led around and dropped on the trailer hitch ball with just one hand.  It’s everything I envisioned when I set out to create a capable motorcycle trailer rig.

As with any motorcycle maintenance, the trailer needed a shakedown run to prove its road worthiness.  There’s a loop near my home that I like to ride after I work on Hester that offers a a good mix of roughly forty-five miles of curves, pavement, and gravel roads.  I decided to forego this loop and just winged it on my first trailer trip out; riding three hundred miles to the Arkansas National Forest for a weekend camping trip.  While I knew the trailer design and ergonomics were solid, I was still a bit apprehensive about the first trip and I kept my speed down to 60mph for the first thirty or so miles.  The trailer pulled like a dream.  Honestly, it’s easy to forget it’s back there, which would be a nightmare in the wrong circumstances.  It’s most important to account for the additional space needed at gas stations, tight 90-degree corners, and while backing into parking spaces.  Within an hour on the road, I was confidently cruising at 80mph and the trip to Hot Springs was uneventful.  I did notice a hit on gas mileage to the tune of about ten percent, which is only slightly more than riding with an adult passenger.  That's a cost and time factor I will have to consider as I plan trips.

While on the road, I got a lot of odd stares from people not only unaccustomed to seeing a motorcycle pulling a trailer, but a trailer with a solar panel on its roof.  It made for interesting conversations at gas stops, with most people wondering where the equipment the panel charged was and how I interconnected everything.  I think I’ll make a YouTube video.

I learned an interesting aspect of trailering that I had not previously considered.  If I spot an object in my path riding on two wheels, I can usually dodge it.  If I’m in a car, I can usually straddle it.  This is not the case when pulling a trailer with a motorcycle. If there’s an object on the road and insufficient time or distance away to change lanes, something is going to hit it.  Trike riders know this but I’ve never ridden a trike, so it was an epiphany for me.  I’ll do some research on the best tactics, but I suspect letting one of the radial tires take the impact is more practical than the motorcycle.  For one, motorcycle tires are inline, so if one hits it the other follows and they could both be damaged.  The trailer wheels are separated by an axle and the radial tires are more forgiving (and far less expensive) than motorcycle tires.  Trailer wheels are also much easier to change than motorcycle wheels and I carry a spare and lug wrench in the trailer. 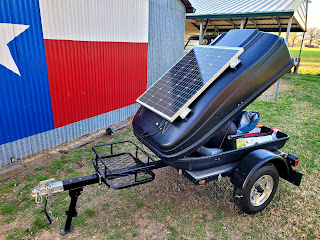 All in all, Hester’s first outing with her tag along was an uneventful success.  All the trailer needs is a name.  I decided to call her Pearl as that was the name of Hester Prynne’s illegitimate daughter in The Scarlett Letter.  It seemed only fitting.