The alarm was set for 4am. Of course I was wide awake staring at the clock at 3:30. Still not excited. Perhaps it's the apprehension I described yesterday. Nevertheless, I was up and moving with plenty of time to spare for a 5:00am KSU.

I hit the road on time and managed to get across the Dallas/Fort Worth metroplex before rush hour. Once I hit 287 west towards Wichita Falls and Amarillo, it's a mind (and butt) numbing straight, flat ride to Interstate 40. I experienced my first heart pounding drama before I hit Wichita Falls. I'm breaking new ground on this trip. Pulling the trailer and Hester's rear tire is a Yokohama car tire. There are many reasons for using car tires in the rear; too many to go into here, but it's safe to say, with the right tire running the proper air pressure, the ride is smooth and far less susceptible to road hazards. But I digress. The new tire and the trailer combined to throw my gas mileage off. I usually get 42-44 miles per gallon, but on my shakedown camping trip in April, the trailer yielded about a ten per cent fuel hit. I can live with that; I just want to know. I was cruising on 287 marveling at the fact that I was 230 miles into the current tank of gas and the miles-left countdown alert had not triggered. That alert was usually good for another thirty miles. I was stoked! Then, as fast as I did the math in my head, Hester's motor started sputtering and died. I managed to coast to the shoulder and realized that the alert had gone off. I apparently missed it. Fortunately, I keep a spare gallon of gas in my saddle bag. Five minutes later, I was back on the road feeling like a doofus for missing the alert, yet simultaneously clever for having the spare gas on hand. So now I know. Roughly 38 miles per gallon pulling a 330 pound trailer. Current gas prices notwithstanding, it's a small price to pay for the hauling convenience.

I crossed the New Mexico state line and headed north off the beaten path, following routes I had selected for their curves and remoteness. Little did I know when I exited Interstate 40 just how off-beaten the path would get. I rolled into the thriving metropolis of Roy, New Mexico and stopped for gas and to collect my thoughts. I had not planned to ride more than 500 miles a day and I was blowing that. I decided to head into the mountains towards Angel Fire and Taos and seek out a place to camp. Riding NM SR120 was great. From Roy, it climbs and descends several mountain passes. I was surprised how easily the additional 330 pounds behind me handled in the twisties and elevation changes. Admittedly, I had stopped earlier to adjust the load when I noticed the trailer behaving a bit wobbly. It was pulling great now. 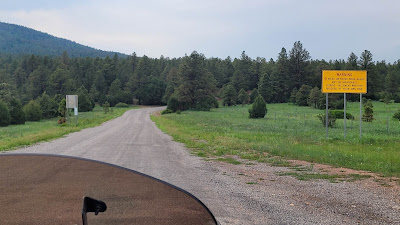 SR120 had a lot of warning signs dissuading truckers from following it. After the third, the warning gotmore severe and mentioned nine miles of unpaved surface. The road was an amazing twelve miles of super tight, off-camber turns and climbs and drops. About three miles past the unpaved warning, I decided the warning was a ruse to keep truckers away. At four miles past I realized they meant it as the smooth pavement gave way to somewhat packed gravel that lasted for what seemed like an hour. I now found myself calling into question all that good feeling about Hester handling the trailer so well. Eventually the gravel gave way to pavement that carried me all the way into Angel Fire. 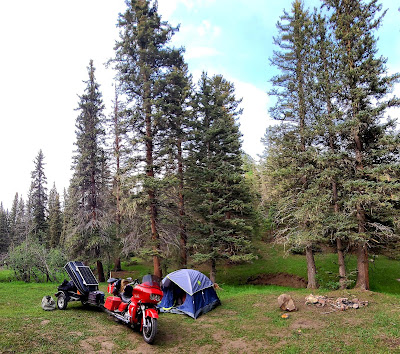 The hunt for a campsite was on. There were plenty of RV parks, but none for tents. One guy in an RV recommended a spot on the mountain road 64 between Angel Fire and Taos. I was heading to Taos anyway, so it made sense. Finding the spot was a bit tricky, but it was absolutely worth it. I drove about three miles along a gravel road that paralleled a small flowing creek and settled on a spot that might give me grief when I pull out in the morning. Within minutes, I had my tent up, my air mattress filled, and my sleeping bag unrolled. I kicked back in my chair to take in the scenery and do a little writing. The dirt road and the grassy path where I'm camped has seen a steady stream of cattle passing by; hundreds of cows of all shapes, sizes and ages. This must be a routine for them because they barely flinched when I rode by them as I was seeking out a campsite. It' dusk and the parade seems to be over. The temperature has dropped steadily and I'm actually wearing my jacket. Between the birds chirping and the breeze whisping through the trees, I should sleep like a log tonight. The plan is to get deep into Colorado tomorrow. I hay have to alter my itinerary if the fires in Red Lodge, Montana remain out of control. I read this morning that Beartooth Pass was closed. Hoping for the best.