Alaskapade 2011 - Posts from the Entire Ride in Chronological Order

By popular demand, I posted the events from the ride in the order they actually happened.  There's nothing new here.  If you followed the adventure as it played out, this would be merely a review.  If you didn't read the posts beginning in October 2010, you might find some interesting insight into my head by doing so.  However, I accept no responsibility for screwing with your mind.
October 10, 2010
How long am I to keep saying "One of these days, I'm gonna do that..." and still believe it?


Alaska has been calling me for years.  I have long dreamed of riding my Harley there from Dallas and making a video/photo documentary of the trip.  I want to ride up the Dalton Highway to Deadhorse Alaska in the Arctic Circle and take in the surroundings at the sign. Don't ask me why because I don't have an answer.  It's just a nagging vision in my head that I need to realize.  Up to this week, it was a pipe dream; a one-of-these-years thing.
Today, it's different.  A co-worker and friend dropped dead at his desk this week.  He was only 48 years old.  I'm 47 and like me, he had raised his kids and was at a point in his life where realizing pipe dreams like this was possible.  Also like me, he rode a Harley and we used to tease each other over who would make it to Alaska first.  Our plan was to meet up in Kansas and ride into the Arctic Circle together.  Martin waited too long and his untimely passing is a painful reminder to me that that I should not.  I will not.  To add to that, my 68 year old father in-law sits in a wheel chair with 25% mobility following a massive stroke last year.  He completed two full careers and was set to enjoy the lifestyle for which he worked so hard.  These examples are weighing heavily on my mind right now.  There is rarely a good time to do things like this, but I'm all too aware that too late will come before I know it.
Alaska is calling again.  This time, I'm answering.  Get ready Yukon, because in June/July 2011, the Infidel is coming.
I will post details of the logistics and planning on this blog as I sort them out.   It won't be too exciting to read.  If nothing else, each entry will serve as a reaffirmation of my plans and provide a checklist of important items to make the trip not only possible, but somewhat safer.

June 17th - The Longest Night
Well, the Alaskapade is about to kick off and I think I'm done packing. I have all the camping, bike, and personal equipment I need for the journey packed and ready to roll.  I've spent the last eight months searching for the right gear at the right prices, planning routes, sorting out the logistics, working side projects for gas and expense cash, working out and trimming down, and it's all come down to this.
Selecting the right camping gear was a tedious process.  Everyone had an opinion and there was a lot of good gear out there from which to select.  There is also a great deal of expensive equipment out there.  In the past, I never gave packing size or weight a second thought and as such, most of the gear I already owned when I started planning this was way too large and heavy to pack on a motorcycle.  As detailed in previous entries, I have been fortunate to find just the right camping gear that was not only functional, but is light and highly compactable.  I can set up and pack up my tent in less than five minutes. It has plenty of space for me as well as room to store anything I choose to remove from the bike at night.  The tent, sleeping pad, pillow, inflatable repair kit, and tiny collapsible camping chair all fit neatly into a waterproof cylindrical dry sack that measures only 22" x 14" and weighs in at 11 pounds.
I'll be carrying more high-tech gear than the Apollo 11 crew did when they walked on the moon. My GPS has freshly updated North American maps and includes addresses for every Harley dealer in the continent in case I need to stop for service.  It also has 16 gigs of internal mp3 storage for all my tunes and a small library of audio books. The tunes, books, and even cell phone audio will play wirelessly via bluetooth into the stereo speakers mounted inside my helmet.


My Spot Connect satellite transponder will let my family and friends keep up with me on the road with location updates posted to easily-read Google maps that post every ten minutes. Unless I porked something up, the map should be at the top of this page now.  Viewers can click and drag to pan the map.  If your mouse has a scroll wheel, roll it up and down while pointed inside the map to zoom in and out.  If not, use the zoom buttons at the upper left of the map.  The lower right corner of the map has buttons to switch from map to satellite or hybrid views.  When there's actually tracking data to show, you can move your cursor to the tracking line to see when I was at the location last.  I will use my Spot Connect with a bluetooth connection to my Android smartphone to send messages out to those who have elected to receive updates from the road. There's also an emergency 911 button and even though I paid for search and rescue insurance, I don't plan on needing that.


If I get sick of the tunes I'm packing, I'll have my Sirius satellite radio with me as well.  I'll also be traveling with two HD video cameras, two digital cameras and two tripods, all of which I plan to use to capture as much of the action as possible for the post-journey Alaskapade 2011 documentary. Each days' footage will be downloaded to my laptop and backed up to an external hard drive when I stop for the night. 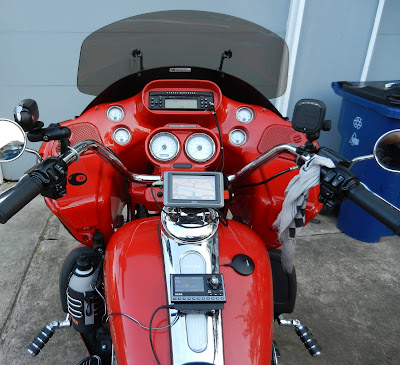 If I come across something interesting and I have cell coverage, I will post pics to the blog from my Android phone. Otherwise, look for the next written blog update from Denver tonight - unless I'm too tired to type.
Day 1
Dallas to Denver - 854 Miles
14 Hours Saddle Time
I made this same trip along this same route last July, so I pretty much knew what to expect in terms of traffic, terrain, and body fatigue.  The route is pretty flat and straight until I hit Raton Pass in New Mexico.  This is good because it takes a day for my body to acclimate to the long hours in the saddle and I’d rather that happen on easy terrain as opposed to on the Alcan or Dalton Highways.  Three stops to fill Hester’s tank (and one to empty mine) with a lunch at one stop and dinner here in Denver made for a pretty uneventful day.  Hester ran smooth and comfy all the way up and she's fueled and ready to roll again tomorrow. I'm staying at the same hotel I stayed in last year when I rode to Seattle. I even got the same ground floor room right near the parking lot where I can see Hester clearly.

It looks like the Spot satellite transponder has lived up to my expectations and updated my position. I'm keeping the updates I send to my subscribers to a minimum until I get into Canada and actually have something interesting to say.  I want to go to bed, but I need to download the video footage I collected today.  I'm pretty beat and probably won't review much of it.  I just need to ensure the camera memory cards are clear for tomorrow's ride.


My back feels pretty good.  I was worried I'd be miserable, but so far, so good.  A dip in the hotel jacuzzi will sure help.  I'm really glad I installed the highway pegs.  They offer another foot placement option, which is imperative on a fourteen hour ride.


Next stop: Great Falls, Montana; roughly 750 miles. Last year when I left Denver, I headed west through the mountains towards Boise and it was a breathtaking ride.  Tomorrow's route takes me straight north through Wyoming and up to the top of Montana.  I expect Wyoming will be about as exciting as watching paint dry. Still, I'm on a bike and that beats driving a cage any day, any place.