From a Better Place

"Old age and treachery will always beat youth and exuberance."
- David Mamet
Ten years is a long time.  It's almost a decade! 😃  In thinking this return trip through, it occurred to me that much will have changed from 2011 to 2021.  The roads up there certainly should be in better condition, shouldn't they?  There was a great deal of construction in 2011 along the ALCAN that should have been completed years ago and thus should yield a much smoother ride in 2021.  I suppose also that those improvements could have run full cycle over the years and the roads could be just as bad from wear, or possibly even worse ten years after.  Rest assured, I will be prepared for whatever the ALCAN throws at me.  I may be older, but I'm experienced and knowing what to expect is half the battle.
Hester is also ten years older. And while some may raise an eyebrow over riding a twelve year-old motorcycle into such unpredictable terrain, I have as much confidence in the old girl now as I did in 2011.  Just as Hester Prynne was older, stronger, wiser, and even admired at the conclusion of "The Scarlet Letter", Hester the Road Glide was rebuilt from the ground up after being totaled in a highway crash in 2016.  My injuries from the crash were minor and I was crossing the Australian Outback on a dirt bike a month later.  But I digress.
Hester also has a new stronger 110 cubic inch motor, Öhlins shocks, and more ergonomically comfortable handlebars.  All of these improvements yield a more comfortable and most importantly, a more reliable ride.  Over time, Hester Prynne also became a respected member of her 1649 Puritan Massachusetts Bay colony.  My Hester and I have become known as an iron butt long haul ride team in my motorcycling community.  We recently completed a 1,400 mile ride from Gettysburg, PA back to Texas in a 20 hour straight shot.
Thinking introspectively, there is another change in ten years; a significant one.  I have changed.  If you read my original blog post or watched the Alaskapade! 2011 video, you will recall that I was not in an emotionally healthy place at that time in my life.  Striking out alone to parts unknown on a motorcycle with no real itinerary was probably not the smartest of ideas.  But I was driven (no pun intended) to get as far away as possible and part of me honestly didn't care if I ever came back.  I was fairly certain back then that few others cared if I returned either.  I won't elaborate on the reasons or details here.  If you knew me well then, you understand.  If you didn't, it doesn't matter because my emotions were clear in the video and in my writing.  It's irrelevant at this point because those days are gone and I am not the same guy I used to be.  This trip will be different from the onset because I am coming from a better place in my life.
I have since moved to the country and adapted to a slower pace in life.  I am wholly content with my family and social life.  I probably interact with horses and chickens more than I do with people. I am starting to see the fruit of my lifetime of labor and savings to the point where there's a light at the end of the retirement tunnel and I'm fairly certain it's not a train heading at me.  Most importantly, I no longer feel financially necessary yet otherwise insignificant like I did a decade ago.  Whether or not that was actually the case, it was how I felt and it drove and motivated me.  I will head to Alaska this time with a focus on where I am going as opposed to looking in the rearview mirror and choking down the feeling that no matter how far I went, I wasn't far enough away.
Friends and liars
Don't wait for me
Cause I'll get on
All by myself
I put millions of miles
Under my heels
And still too close
To you, I feel
- Chris Cornell - Audioslave
That tune follows a prolific point in the Alaskapade! 2011 video where I started to open up about where I was emotionally.  But quoting the unnamed serf in Monty Python and the Holy Grail, "I got better".
I have a request.  Take time to re-read my Alaskapade chronological blog entry.  I read it last week and realized that I really never had before.  I just wrote it and posted it.  Am I conceited to say that I really enjoyed my own writing?  I had been told by many that it was really descriptive and well-written and after reading it, I kinda agree.  Also, re-watch the Alaskapade! 2011 video.  I believe that while the video definitely compliments the written account, it doesn't tell the whole story as well on its own.  The tunes in the soundtrack to the video were selected specifically for the time in the video at which they appear and the lyrics matter. 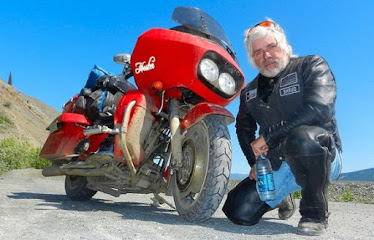 Speaking of videos, I won't commit to producing a video for this trip.  The amount of work that went into the original was far more than I anticipated and I had expert help from a friend whose interest, time, and availability I can't predict ten years later.  The prospect of having other riders along for this trip further complicates things in terms of producing a video.  I was completely open with my emotions from start to finish in 2011.  They were mine and mine alone.  Putting the good, the bad, and the ugly out there for all to see was one thing when it was my good, my bad, and my ugly.  Broadcasting others' emotions, actions, achievements, and failures could potentially be an issue and I am not interested in seeking permission from others to express myself.  So while a video is possible, I make no promises.
Posted by Scott "Shrug" Wilson at 9:25 PM