Now excuse me while I go way off the Alaskapade topic and bitch a moment.

I know I've already whined about the TSA here, but this week I've been subjected to airport travel twice. Actually, this isn't out of the ordinary for me. What is out of the ordinary for me is dealing with airport hassles four times during Thanksgiving week with the TSA's new "enhanced" screening measures. Apart from watching Ma's Roadhouse on TruTV, air travel during Thanksgiving week is the closest thing to cruel and unusual punishment to which I have voluntarily subjected myself.

Commercial air travel in a post 9-11 world sucks.  I can't think of another industry to which the public not only volunteers, but actually pays to be subjected to government-induced ineptitude and personal violation. It wouldn't bother me so much if I were not convinced it was all just window dressing.  Bruce Schneier's book "Beyond Fear" aptly labels the TSA and its actions as "Security Theater".  I have on many occasions passed contraband items (a jeweler's screwdriver, a fork, etc.),past the eagle eyes of the TSA screeners - purely by accident, of course.  I once accidentally carried four ounces of hair gel on a flight, no doubt subjecting millions of American citizens on the ground under my flight path to unimaginable peril.  The reality is this: If I can unknowingly fool the TSA, then the "terrorists" with intent certainly can also. So just who is the Department of Homeland Security trying to fool here; the uninformed public who aren't going to fly anyway?  Security Theater, indeed. 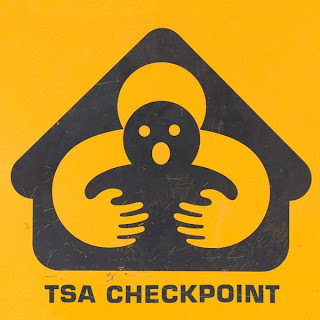 Now, just in time for the holidays, we have the previously-mentioned Enhanced TSA Screening procedures which include personal full body x-rays that would be R-rated in a movie theater and physical groping to an extent that if done by anyone other than the government, would be considered sexual assault.  The x-rays are very revealing and the TSA has promised that the images would never be made public.  Look at the image below and take that promise to the bank!

Since President Obama and Department of Homeland Security chief Janet Napolitano are so supportive of the new procedures, I think it only fitting that images such as these should make their way on to the Internet also.

Personally, I fly way too much to subject myself to x-rays every time I fly.  I don't care who sees my junk.  I just don't want that much radiation from a device that was seemingly rushed on to the market without any significant testing as to its effects on human tissue and DNA.  So, on my last few trips, I opted for the personal pat down.  Yes, it adds time to the screening experience and holds up other passengers, but honestly my concern for other passengers' schedules can be measured in micro give-a-shits.

Fortunately, as evidenced by the photos below, the TSA only selects passengers for Enhanced Screening who appear to pose a true threat to the rest of the flying public.  The image of the Muslim woman screening a nun is rich.  But hey, at least they're trying to make it fun for the kiddos!  Janet Napolitano went on record this week saying that Muslim women might be exempt from the process because it is offensive to their faith.  I'm actually offended by their faith.  Nevertheless, how considerate of you, Ms. Napolitano.  Did you ever stop to also consider that the very reason the country is debating this issue is because of Muslims in the first place?

The first time I was groped, I was actually shocked at how invasive the procedure is.  The guy actually grabbed and squeezed my inner thighs and my crotch. I'm a licensed Massage Therapist and I don't get that personal with clients who are lying naked on my table under a sheet and who are paying me to touch them.  It got me thinking though. If I have to be groped so personally, at least make it worth my while and have the procedure performed by a gay guy who really knows how to touch a man.  I might as well get something out of it.

I imagine the Enhanced pat down procedure is even more time consuming for women when you consider the time it takes to dim the lights, put on some Barry White music, and light some candles.  Call it Security Theater...with foreplay. There may actually be a revenue opportunity here when you consider how many people would pay to watch the girl-on-girl action of female TSA screeners groping female passengers.  I see a new cable TV channel in the works.  Too bad Security Theater is already taken.
Posted by Scott "Shrug" Wilson at 1:34 PM