To the Arctic Circle (and Beyond or Back?) 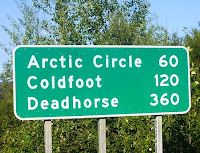 This is it.  Today, I head north on the Dalton highway and into the Arctic Circle.  I'm told that the Circle officially lies about 200 miles north of Fairbanks and that the terrain isn't too bad this time of year for an experienced rider.  I suppose I'll see for myself today, but all I know is I'm so close to my goal I can taste it.  My friend Jeff has been giving me updates from the pump stations along the Trans Alaska Oil Pipeline.  I rained up there yesterday, but stopped last night when I hit Fairbanks.  Jeff advised that I wait it out today and let the sun dry out the roads.  I needed to get the tires I purchased mounted, so I heeded his advice.  With fresh rubber and new brakes, Hester is ready to roll.
Once I get there, I have some decisions to make.  My original goal was to just make it to the Circle monument and place Martin's hat there. Shortly thereafter, I expanded the journey northward and wanted to try to get as far as Deadhorse near Prudhoe Bay. I abandoned that later goal upon reading of horrific road conditions between the Circle and Deadhorse.  Now I'm rethinking the rethinking that I rethought a while back and I think (again) that I want to try to make it to Deadhorse.
I don't imagine I'll ever be up here again, so this is likely the only chance I'll have to truly ride to the top of the world.  I still haven't decided which way I'll turn after my little Arctic Circle arrival celebration. Weather, road conditions, and my general mood will all impact my decision.  If I turn right, the adventure continues and I'll go as far north as I can.  If I turn left, the adventure still continues as I head back home via the Black Hills.  I'll send a satellite check-in message from the Circle when I arrive there.  Since I won't have a means of updating this blog until I get back to civilization, you'll have to check in here and view my GPS status to see if I turn north or south when I leave the Circle.

Watch my status on the map, look for my update alerts, and wish me luck.
Posted by Scott "Shrug" Wilson at 6:00 AM

This entry will probably rub some people the wrong way.  That said, please know two things:
Actually, I don't intend to offend my friends in Canada. We have plenty of stupid policies down here too.
I've mentioned before that the majority of my nights on this journey will be spent camping in a tent.  I love tent camping and used to be an Olympic caliber camper.  These accommodations are as much a preference as they are a financial necessity, especially given the skyrocketing price of gas and its impact on my Alaskapade budget.  Nevertheless, when I consider the fact that Alaska boasts the highest population of bears and wolves in the United States, I have a legitimate reason to be somewhat concerned for my safety.  I don't go looking for trouble, but anyone whose read any of my stuff knows trouble and stupid situations just seem to find me.  Obviously, I can't get to Alaska without passing through Canada. The Canadian portion is not just a logistical requirement, it's also something I look forward to.  Riding through the Canadian Rockies, Banff, Lake Louise, the Signpost Forest, and the ALCAN are all aspects I am excited to see.  The one aspect I'm not looking forward to is the Canadian requirement that I travel unarmed.
All you left-wing voluntary victims can unroll your eyes now.
I have a squeaky clean past and as such, have passed FBI and local background checks and earned my Concealed Handgun License. Most states have reciprocal carrying agreements with Texas and I'm allowed to drive or ride with personal protection while in them as long as I abide by their specific requirements.  I am not paranoid; I am prepared.  I do not live in fear.  I live with the quiet yet confident knowledge that I am willing and capable of defending myself and those I love should the need arise.  I find it ironic that so many anti-gun people would throw a fit if they learned that the school they send their kids to didn't have fire extinguishers, but wouldn't tolerate that same school allowing its faculty to carry a weapon.  The irony becomes obvious when you ask yourself when the last time a student died in a school fire compared to when a student died because no one was allowed to defend them against an armed assailant.
I've been a helpless victim before.  In 1990, I woke up on the side of the freeway in east Texas, my face crispy from my own sun-dried blood and seeing blurry black dots that eventually came into focus as buzzards circling over me as laid on the highway frontage road. I had the living shit beat out of me by three guys who looked like Larry, Daryl, and Daryl because I was unaware of my surroundings.  I have also been on the other side of the fence.   In the years that followed, I took measures to learn to protect myself and those measures paid off when I successfully did so against two assailants in Chicago's O'Hare Airport.  I was arrested on the spot, but was released after witness statements were collected and ultimately exonerated when video surveillance revealed that I was actually the good guy.  In January of 1996, the State of Texas enacted its CHL program and I earned mine in May of that same year.  The way I saw it, I had been getting my head kicked in in martial arts training for the previous five years and if the State was offering me another level of defense, I would be dilatory for not taking it.
Canada offers nothing for handguns and while a rifle strapped to Hester's hip might look cool, it might also draw unwanted attention. I spent weeks researching the Canadian Firearms Center web pages looking for a legal way to carry as I make my way to up Alaska.  Canada classifies all handguns regardless of barrel length as restricted and the ones small enough to reasonably conceal are prohibited altogether. There is a special provision to the law that allows US visitors with licenses issued in the States to carry a pistol after a stack of forms are filled out and temporary license fees paid.  This provision comes with one caveat. The pistol cannot be carried for personal protection, nor for hunting.  So, unless there's a national shooting competition for which the Customs officer can verify I am registered, I'm out of luck. Don't think I didn't consider trying to sneak mine in.  I'm told by other riders who have ridden into Canada that Customs Officers at the smaller points of entry practically disassemble your motorcycle and actually make riders unpack everything for inspection before letting them through.  I know that having Hester impounded and myself tossed in jail on firearms smuggling charges would make one hell of a blog story, but I think I'll pass.

One member on HDForums.com mentioned that he had heard of a Canadian program wherein your handgun is sealed in a tagged container at the Canadian port of entry and allowed to be carried through by the owner.  At the exit border, the tags are verified as legitimate and unbroken and the pistol is unpacked. As unlikely as this seemed, I called around the Royal Canadian Mounted Police Customs offices and asked if such a program did indeed exist.  I received mostly laughter from everyone who answered.  Interestingly enough, I had a few private emails telling me several places along my route where I could buy a pistol from individuals on the street.  I suppose the old saying is true: If guns are outlawed, only outlaws will have guns.
I have a workaround though.  I found a Federal Firearms Licensed dealer in Tok who will receive my weapon for me. Tok is the first town I'll reach after I enter Alaska.  I'll ship it from a FFL dealer near my home a week before I depart and it will be waiting for me when I arrive. I found another FFL in Washington and will have my Tok FFL ship it there so I'll have it for my return trip.
It seems not only unfair, but puerile that I have to expend so much energy and money just to exercise my Constitutional right to self defense.  I know, I know.  Canada doesn't care any more about our Constitution than I do about their maple syrup or Celine Dion (the two of which I find equally interesting). Still, it's not like they can't completely check me out in mere seconds while I'm at their station. I read about a rider who was denied entry into Canada because he had a DUI over five years prior and had to seek a Canadian Minister's Approval of Rehabilitation and pay a hefty fee to enter.  I've never had a DUI nor a record of any kind other than a traffic ticket years ago. My point is that with existing INTERPOL networking capabilities, they clearly have the ability to look into the legal records of American citizens whereupon in my case they will see that I have passed an US FBI background check and have been issued a CHL.  Admittedly, that alone will probably incite them to crawl up my butt with a microscope.  Nevertheless, I find it incongruous that as a proven law abiding citizen I must be subjected to the same obligatory victim status to which they subject their own citizens when all I'm trying to do is get to my country's state of Alaska or back to the lower 48.
I'll stop whining now.  A few hours of my time and some cash are minor annoyances compared to the experiences I'll have on this journey. At the very worse, it gave me fodder to vent here. As if I needed that...