The rest did me good and on Sunday, I checked out and settled in for what would be an uneventful short 2.5-hour ride south to Carson City, Nevada to the Shark Week XI host hotel.  I pulled in as quietly as possible, disconnected and backed Pearl into a covered parking spot, parked Hester next to her in the same spot, and then covered them both.  My plan was to lay low and continue to recover in hopes that I could ride home on Friday.  Two days prior, I had spoken with the front desk manager during my unsuccessful attempt at checking in early and she was aware of my physical predicament.  Much to my surprise, a ground floor room was available for me at 11:00am and the thermostat was an old-school panel that didn't require hacking.  Things were looking up for Shrug.

Shark Week XI is in the books.  Even after attending nine of the eleven events. I find it amazing that a ragtag group of riders spread across the continent have managed to carry on the Shark Week tradition for eleven years.  It's a strictly volunteer-run event and the locations and hosts for the next two years are already determined.  We will be in Appleton, Wisconsin next July and in Virginia the year after.  The fact that I typed "We" has significance.  Read on.

I suppose I should pick up where I left off after my crash in Cloverdale, California.  In a rare display of patience perhaps rooted in self preservation, I actually took a day off to convalesce and recover.  I must admit that getting into my hotel room was almost as challenging as riding there after the crash. I rolled into the hotel parking lot and squeezed Hester and Pearl into one of the precious few available parking spots and of course, it was as far from the hotel lobby as I could possibly get.  I had booked my room online using the Hilton Honors app, but did not check in online like I usually do.  Looking back, I suspect my subconscious mind was telling me to wait till I actually got there...just in case.  I hobbled into the lobby as the desk clerk was chatting it up with a guest and the topic was apparently fingernails.  The desk clerk looked my way as I limped in and looked up at me again while I patiently waited.  Still, that guest's nails were apparently of paramount importance because I was otherwise completely ignored.  I pondered the possibility that my crash was more serious than I initially thought as visions of "The Sixth Sense" wandered through my head. Finally, I opened the Hilton app on my phone, checked in online, selected the digital key, hobbled up to my room, and let myself in.  Of course, the room was on the far opposite end of the hall from the elevator.

As mentioned above, I spent the entire day Saturday hanging out by the pool and in my room.  Having an entire day to do nothing would normally make my skin peel clean off my back, but not on this day.  I sat beside the pool under an umbrella and watched the families with kids frolic and splash.  I remembered how when I was a child, I would get so excited over the mere existence of a hotel swimming pool.  It didn't take long before I was overheating in the California sun, despite the occasional splash from various kids' cannonballs falling my way.  I headed back to my room and when I opened the door, an arctic blast of cold air hit me head on.  It was perfect.

In my role as a wireless network architect, I've designed and deployed hundreds of hospitality wireless networks.  This experience comes in handy because I like my hotel rooms really cold. These days, many hotels use smart thermostats that sense movement (or lack of therein) and will switch the fan and air conditioning off when the guest leaves the room.  The problem is these "smart" sensors don't know the difference between an empty room and a room with someone sleeping (and therefore not moving) and will switch the system off.  They will tell you it's about "going green", but in reality it's all about reducing utility costs for the hospitality industry.  I tend to be a light sleeper on the road and with the fan off, I can hear cell phones ringing, toilets flushing, people stomping in the hallway and in the room above mine, and every other sound one might expect to be present in a hotel room on a Friday or Saturday night.  Fortunately, my previous hospitality network experience includes knowledge of the various wireless climate control systems and more importantly, how to hack them.  The first thing I do when I check into a room with an automated thermostat is hack it or override it using a hidden switch in the in-room AC unit.  The result is my room feels like a meat locker and while this typically suits me, I wasn't prepared for the chilling blast that greeted me after I left the swimming pool and the 100°+ temperature.  My nipples instantly looked like oversized Hershey's Kisses and I'm pretty sure other parts didn't reappear until the next day.  But I digress.  With my air conditioner blasting nonstop throughout the night, I slept-in (to the extent that I slept at all) the next day, which was Sunday.  My 36-hour self-imposed introspection exile complete, I limped the length of the hotel to the elevator, across the parking lot, saddled up Hester, and pointed her south towards Carson City and the Shark Week host hotel.  The ride down was uneventful and relatively flat and straight until I got to the Eldorado National Forest, which is when the elevation changes and switchbacks started.  Honestly, seeing the curves that awaited me ahead on my GPS made me a bit nervous and I began second guessing my plans for the week.  Actuating the clutch with my broken hand to negotiate the curves and to accommodate the increasing traffic was excruciating.  My confidence was shaken and my body was broken.  I am not accustomed to this and it was an epiphanic experience.  My thoughts drifted to a plan to check in for the night, greet my friends, and then quietly disappear and ride home to lick my wounds in private.

The official arrival day for Shark Week is on Monday, but people have been arriving earlier and earlier over the past few years.  Some arrived at this year's event on Friday.  So when I hobbled into the lobby on Sunday afternoon, I was greeted by several riders like the character Norm was whenever he walked into the bar on TV's Cheers.  Everyone seemed to know about the buffalo incident, but I had laid low and only disclosed my California crash to two people.  So when they saw my limping and favoring my left hand, they were surprised.  Then some saw Hester's damage when I was unloading and knew something was up. 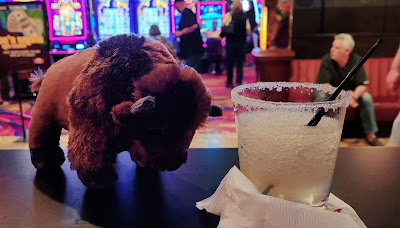 Despite the fact that most of us only see each other annually, Shark Week attendees are a close group of people  who genuinely care for one another.  As such, Shark Week is more like a family reunion than a rally. When people found out about the more serious crash, they instantly asked if I was alright and what they could do to help.  As little as I like that kind of attention, I welcomed their genuine compassion and found it heartwarming. Once they knew I was OK, it was on and the hazing started.  I expected nothing less.  These are my people.  One rider, Garvin, was among the first to approach me.  Raymond and I aren't close as I'm much older than he and I tend to hang among the older crowd. But he rides hard and is always a staple character at Shark Week.  In fact, he's co-hosting Shark Week XII in Wisconsin next year.  If Garvin is around, people are laughing - either with him or at him, both of which are fine with him.  Raymond presented me with a stuffed buffalo as a remembrance of the Father's Day wildlife incident in Yellowstone National Park.  That event seemed so long ago.  Ray's girlfriend Kim bought me a frozen margarita (my favorite) and the two disappeared into the casino.  Physically, I felt like shit and even though my spirits were picking up, heading home the next day was seeming increasingly likely.  I stopped by my trailer to unpack.  It was parked next to Hester and both were covered to hide their battle scars.  I unpacked a day's clothes, my toothbrush, and some pain killers and then limped across the parking lot to my room.  I had a decision to make.
Posted by Scott "Shrug" Wilson at 12:07 PM