It's been a whirlwind couple of days with long hours on the bike.  On Tuesday, I rode across the Deception Pass bridge into Oak Harbor on Whidbey Island.  The bridge holds significant sentiment for me.  My mama used to have a place on Whidbey and it was her respite from the drama and rush associated with the business she ran in Dallas.  I was last there ten years ago when I returned from Alaska and the year before that when we threw mama from the bridge.  I decided to go back and reminisce a bit.  It was a considerable deviation from my route to Shark Week in Lake Tahoe, but I knew I had made the right decision when my eyes swelled up as I rode across the bridge.  The memory of the events from eleven years ago came rushing back starting as butterflies in my stomach and ended as tears in my eyes.  I exited the bridge with a feeling of content.

The day before I reached out to the Whidbey Island Animal Shelter.  One of Mama's close friends (Maryanna) ran the shelter and lived on Whidbey ten tears ago. In my note to them, I mentioned that Maryanna and my mom had been close and my mom had a place there and asked them to please pass along my contact info.  Mama would be 83 years old next month and I wasn't sure if Maryanna was still living, much less still living on the island.  I was hitting the island regardless and it was worth a shot.  About an hour from the island, my phone rang and I was happily surprised to see the caller ID was Maryanna's!  I pulled over to return the call and Maryanna insisted I come by and she offered her spare room for the night.  A reunion and a real bed after six nights in a tent!

It was heartwarming to hear the stories of the antics mama, Maryanna, and their friends pulled off over the years.  We grabbed sandwiches to-go as nothing in Washington seems to be open for dine-in because restaurants are severely understaffed because nobody wants to work.  But I digress.

Maryanna drove me to the Rocky Point beach spot where she and mama used to go drink coffee in the mornings.  We ate our sandwiches as we watched the sun set on the pacific while families with kids and dogs played on the beach and in the surf.  Maryanna said she was the last one left from the old gang and mused about how that was a bittersweet feeling.  I listened intently as she seemed to have a genuine need to express how she felt to someone who would understand firsthand and as I took it all in, I gathered that there's a fine line dividing the pleasure of the heartwarming memories and the sadness from contemplating those who are gone and are missed.  As the sun dipped into the pacific, Maryanna commented that that's the last time anyone will ever see that sunset, adding that they are all unique.  It occurred to me that this would likely be the last time I see Maryanna and it made me think. I told her that I would consider my life a success after I'm gone if there is just one person on the planet who misses me as much as I miss mama.

The ride out of Whidbey Island began early as I didn't have to break camp and pack the trailer.  I headed south to catch the Port Townsend ferry to the mainland and begin my trek southward towards California.  Motorcycles get to go the front of the ferry line so they're the first to exit.  I found myself in the company of four other bikes, but they were all locals.  We spent the short 30-minute crossing discussing Hester, my trailer, where I've been, and where I was going.  The locals offered some insight for my ride to La Push and before I knew it, we were riding off the ferry.

I made my way through the winding roads that comprise just about the entire northwestern Washington landscape.  Hester chewed up the curves like a tiger with  fresh kill.  Like most northwest Washington mornings, the sky was gray and it was cool out with temperatures in the 40's.  I was wrapped in leather from head to toe with a full face helmet and even wore the winter riding gloves that I purchased in 2006.  As I slid them on, it occurred to me that I've gotten more than my money's worth from them.  I rolled into the Rialto Beach park at Forks, Washington and dismounted to get a glimpse of the surf.  Forks and La Push were made famous in the Twilight movie series, with the iconic giant rocks just offshore reaching up from the surf as if they were the land's last grasp at remaining above surface before being swallowed by the pacific.  The beach was awash (pun intended) with driftwood and smooth round stones, each as unique the sand dollars and shells one would typically find on other shores.  There were delicately placed stacks of rocks here and there and a few sculptures carved into the larger chunks of driftwood, each of which likely held some degree of significance for those who  stacked or carved them.  I snapped a few photos and then kicked the rock stacks over and set the sculptures afire.  OK, not really, but I did snap a few photos.

My plan after leaving Forks was to ride to La Push.  I rode up to an open barricade and suddenly the gate dropped right in front of me.  The morbidly obese Indian (feather; not dot) pulled the just-stepped-off-the-surface-of-the-sun sized drink cup from his lips and said "La Push is closed."  I asked about the three vehicles that had passed uninterrupted right before I arrived and was told they were tribal people and La Push was tribal land.  I shrugged it off and asked if I could ride past his booth and make a U-turn to which he replied "No".  I pointed at my trailer and asked him how I was supposed to exit his tribal turf, to which he replied "Not my problem."  I saw in my mirrors that vehicles were beginning to stack up behind me and I could see that the occupants in the truck directly behind my trailer were Indians.  So, I killed Hester's motor, extended the kickstand and dismounted. Then I slowly and meticulously unlatched my helmet strap, removed my gloves and proceeded to disconnect the trailer from the bike.  I detached one of the safety chains and then walked around the back of the trailer (on non tribal land) and detached the other.  Then I walked back around again and disconnected the wiring harness plugs.  Of course all of these tasks could have been accomplished at once, but I was making a point.  I noticed that the short line of vehicles awaiting access to La Push had grown considerably.  Then, I unlatched the trailer tongue and rotated the trailer ninety degrees to the left, but essentially leaving it in the way.  I then mounted up, raised the kickstand and proceeded to inch Hester back and forth repeatedly until she was parallel with the trailer and perpendicular to the guard shack and barricade.  I then dismounted and pushed the trailer behind Hester and repeated the above sequence in reverse as horns began honking.  The natives were growing restless.  Chief Big Gulp stepped out of his box of authority and said "You're holding up my people."  I pointed at the ground on which I was standing and asked him if it was tribal land, to which he replied "No."  Then I pointed at the now very long line of cars, looked back at hm and said "Not my problem".  I started up Hester and slowly rode past the line of cars that now stretched several hundred feet. 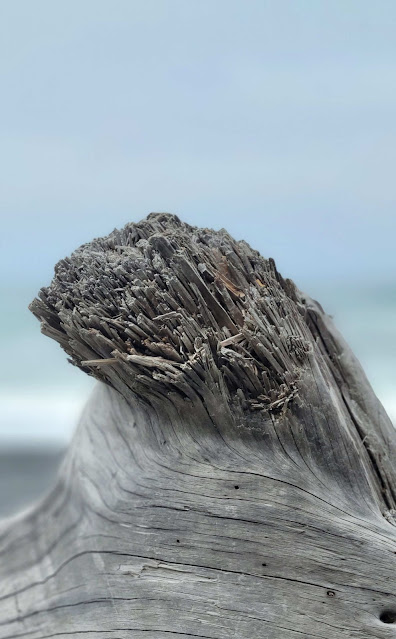 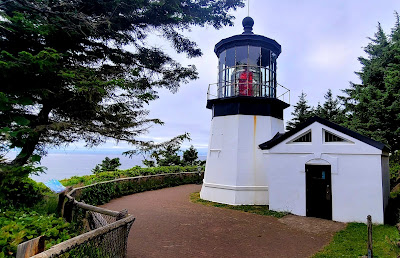 While the rest of the day's ride was uneventful, it was not without amazing scenery and hours of twisty roads.  I stopped to take photos of landmarks I found interesting as I made my way to Cape Meares to check out the lighthouse.  The trip there added about an hour to my ride time, but I had no agenda and I kinda like lighthouses.  While at Cape Meares, I noticed I was feeling cold and realized much of the day had slipped away.  Granted, I had no real agenda, but I was running out of daylight and I had no idea where I would be camping.   I was stricken by how much earlier the sun sets having only ridden about 400 miles south from Whidbey Island where nightfall wasn't until 9:10pm.  I stumbled across a campground that appeared to be closed, but there were workers and construction vehicles present, so I rode in and asked if I could camp for the night.  My heart sunk as the guy there said "we're closed for remodeling" and then it surfaced again when he said, "we own the grounds across the street too, just go pick a spot."  I was relieved to say the least.  I rolled into the area to which he pointed and found an excellent tent spot just above a creek with a small waterfall that would provide constant sounds to lull me to sleep.  My next planned stop would be Bend, Oregon.  I tried to think about the route and possible alternatives, but my eyes shut as fast as my head hit my pillow and I was out like a light. 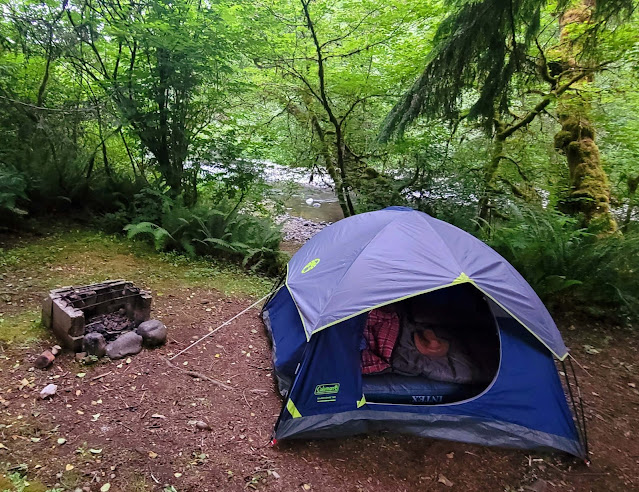 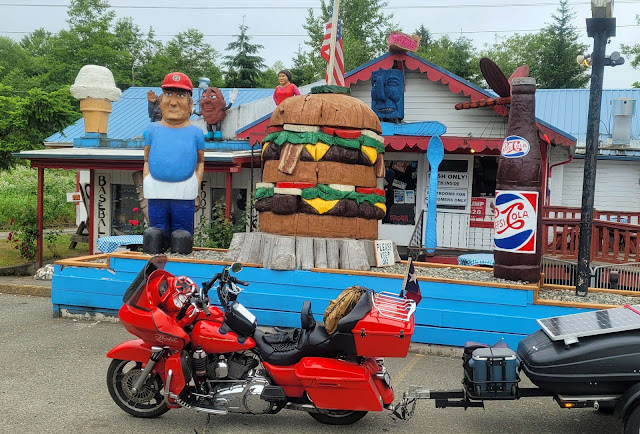 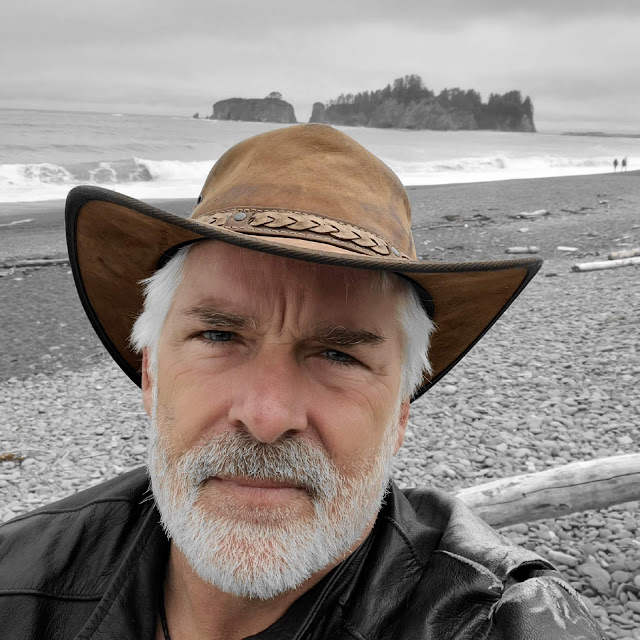