'Twas The Night Before...

I leave tomorrow morning, KSU 5:00am central time.  If you're tracking, it should go live a short while after I depart and I'll appear on a map somewhere west of Dallas.  But I digress.

Admittedly, I'm typing this with mixed emotions.  When I left for Alaska ten years ago almost to the day, I was wired to the hilt and laser focused on touching that sign at the Arctic Circle and knew where I would be stopping each night in order to reach the Circle on schedule.  It's different this trip.  First and foremost, there's no Alaska and irrespective of the cool scenic routes I've created, the excitement factor is fractional by comparison.  Second, with no Alaska, there's no real need for a schedule.  From the beginning, I centered this trip around the 11th annual Road Glide Shark Week with a plan to arrive in Lake Tahoe on June 27th.  I'm still going to Shark Week, as that gathering is my absolute favorite trip each year.

So why I am I not excited?  I think it's a case of apprehension.  When I rode to Alaska, Denver was my first night's stop with Great Falls, Montana on the itinerary for night number two. I knew it for months before I left and I could envision myself riding into town...as planned.  For this trip, there is no plan.  I don't have to be anywhere by any date except for Lake Tahoe, twelve days from tomorrow. I can stop where I want, whenever I want  And that is where I believe the problem lies.  I suppose I need some direction, even on vacation.  Who knew?  I'll go to sleep tonight with full knowledge of when I'm rolling out, but with no idea where I'll go to sleep tomorrow.  I suppose there's a degree of adventure in that, but maybe I subconsciously crave a bit more structure.  These last few sentences sum up my whole dilemma.

My last long ride was to Shark Week X in Gettysburg.  I rode from Texas with my friend "Longway" and we stopped in Louisville, KY before meeting a group of Shark Week X riders in Pittsburgh where we hung out and toured the sights for a night before riding on to Gettysburg the next day. We enjoyed the week in PA with 150 fellow riders, despite the Governor's draconian China virus lockdown measures.  Then on Friday, I headed 1,400 miles back to Texas...in one day; just to see if I could do it. The solo ride back took me 20.5 hours to complete and included the most intense rain storms I've ever seen, much less ridden through.  I had an agenda. I had an itinerary. I had a goal and it was done!

If you've been reading, I am making this trip with Pearl, a trailer loaded with camping gear and creature comforts.  The whole idea of a trailer is to be able to stop where I want when I want and build my camp.  I've spent the better part of the last year preparing the trailer and Hester for a return trip to Alaska with full knowledge that my hopes could be dashed. I've known since March that Alaska was beyond my reach and have had three months to accept it and make alternate plans.  But plans involve detailed itineraries with scheduled stops and I don't have any of that.  I know. Poor me.  I have to take three weeks off work, get on my custom Harley, and ride around the country with no agenda.  Honestly, I know how fortunate I am and I don't take it for granted.

I've realized that at 58 years old, I'm entering a new phase of my life and it's a phase that includes something I've never really had erfore; chill.  I just need to chill out and ride till I'm done and then seek out a place to camp.  Then I need to wake up whenever I feel like it, pack up camp, and ride to the next chill spot.  Rinse and repeat.  I know people who would kill to have this opportunity and I'm pretty sure I will embrace it after I get a few days of it under my belt.  All I can say now - the night before - is I'm uneasy about it, but I'm outta here at 5:00am.  Stay tuned to see where I wind up. 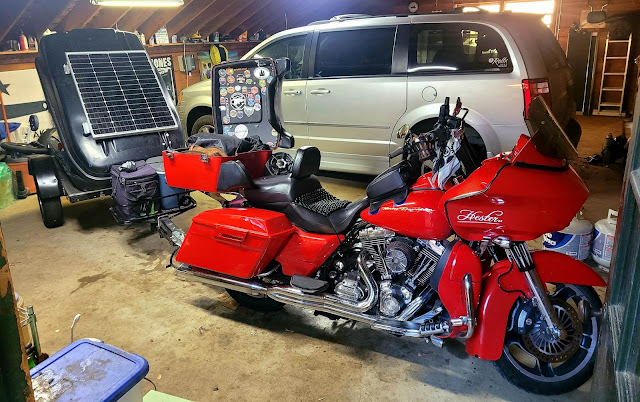