Remember, these retro posts are reposts of entries that stood out to me.  They were written in the context of preparing for my first trip to Alaska in 2011.  Technology and cultural references are a decade old and may seem justifiably dated.

This is Part One of what turned out to be a four part series describing acts on my part, the rationality of which some might have found questionable.

I was sitting in a client's conference room in the midst of pre-meeting smalltalk when a co-worker brought up the Alaskapade and asked when I was leaving.  One of my clients asked what he was talking about and my co-worker pulled up the Alaskapade.com page on the conference room's projection screen.  We had but moments before the meeting kicked off, so there wasn't much time for me to explain.  There was time, however for my client to express his opinion that "this has to be the stupidest thing [I've] ever done".  My first instinct was to argue the purpose for my trip, but this is my customer and IBM probably wouldn't appreciate that.  So, I just grinned, nodded, and bit my lip as the meeting started.
It did get me thinking though.  I know I'm firmly resolved in my purpose for the trip and I also know that I've done many things more stupid than this.  There are too many to list without starting another blog, so I thought I would describe my top three in no particular order.As promised in a previous post, here is another of the three dumbest things I've ever done.


Shooting My Mouth Off to a Prison Camp Guard


Many years ago, I served in the U.S. Air Force. My primary job was an Electronic Warfare Systems Technician and in that capacity, I serviced aircraft-mounted electronic countermeasures (ECM) equipment. The gear's purpose was to jam or deceive enemy radar by altering the apparent location and/or quantity of our aircraft as they flew over threat radar systems. We also maintained radar warning receivers that alerted aircrews to the presence of various ground and air based radar-guided missiles and anti-aircraft artillery. In their day, these systems were on the absolute bleeding edge of microwave and RF signal processing technology and as technicians on them, we were the geekiest of geeks. Training for and working with these systems required serious security clearances beyond what the general public even knew existed.  While I was in basic electronics tech school, I was constantly hearing from friends and even high school teachers back home telling me that strange people in suits with badges showed up at their doorstep asking questions about my background. I had pulled my share of harmless pranks in high school, but I was squeaky clean - the Air Force's wet dream, so securing the necessary clearances necessary to move on to the specific equipment was a breeze for me. I also happened to do really well in the tech training schools. Classes ran six hours a day, five days a week for 18 months, at the end of which I had carved out a 98% test score average. My point isn't that I'm some smart guy. Hell, I flunked algebra in high school.  I just got the concepts and excelled in the training.  Nevertheless, that average earned me Honor Graduate status and that status offered me my choice of base assignments as well as opportunities to apply to join Special Operations forces.  In one of the few conversations my father and I had regarding my career, he strongly advised (based on his own experiences) that I stay away from any special duties that involved National security or Special Ops.
I couldn't wait to get into National security or Special Ops.
I took an assignment at Bergstrom Air Force Base in Austin, Texas and worked in an ECM shop in the 67th Tactical Reconnaissance Wing's Component Repair Squadron (CRS). Many there claimed ECM stood for "Easy Chair Maintenance" and that CRS stood for "Can't Repair Shit".  To a certain degree, they were correct.  So when I was offered an opportunity to step outside the box and work in field intelligence for a three-letter agency, I jumped at the chance.  I would work in my shop until notice of an assignment came to me. These notifications usually consisted of temporary duty (TDY) orders with the location blanked out. Then, I would disappear for a few days and no one in my shop or immediate command structure was allowed to ask where I was. They knew these programs existed and that there were likely people the knew involved, but unless they were directly involved, they had no idea who those people were.  As one of "those people" it was a perfect racket.
These assignments had ancillary training prerequisites that were not overly technical.  Short classes at 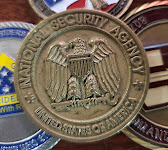 another three-letter agency in Falls Church, VA were common. You can determine the Government agencies there and put two and two together.  Less common but equally required were the field survival courses which were usually conducted in remote locations in the pacific northwest. One of these courses was essentially a prison camp experience wherein the trainees were dropped-in to the forest, captured by "enemy forces", interrogated, and subsequently evaluated on our ability to cope and maintain military discipline throughout the induced stress. There was one other tech in my squadron who had been to "prison" and he had related his experiences to me as a fellow one of "those people".  So when my turn came up, I had an idea what to expect.  In fact, I was pretty sure that I had the entire game figured out.  Hell, at 24 years old, I thought I knew everything.
I was fortunate to be scheduled in the summer months when surviving in the forest is easier.  I can take heat, but brutal wet and cold are not my strong points.  There were six of us from various service branches in my drop group.  When I said "dropped-in", I meant it.  We bailed from the back of a C-130 cargo aircraft and parachuted into the forest.  They didn't just strap a chute to us and push us out the door.  I had been a sport sky diver in years past and had some Air Force training as well.  We could see the camp facility from above during our descent and we knew they could see us parachuting in. We had been told that once we were on the ground we would most certainly be captured immediately and taken to the camp.
Having had some idea of what to expect, I packed peanut butter crackers and a heating bladder of water to live on in case I wasn't immediately apprehended. The course had a finite schedule and I figured every hour I was on the lam was an hour I wouldn't spend in "enemy" hands. I also knew the forest was wired and our location would be known as soon as we hit the ground and started moving.  So when I hit the ground, I buried my chute, dug a hole, covered myself with leaves,and laid there. I wasn't alone.  I discreetly shared my sustenance stash with an Army Ranger onboard before we jumped. We shared a warped sense of humor and clicked in the hours prior to our flight departure. Beyond that, I figured if I was caught with the goodies, splitting the blame between two of us might make my life easier.
We laid in the woods through the night and were awakened from the pre-dawn silence by an announcement blasted through a loudspeaker system in the trees instructing us to turn ourselves in. Specifically, the instructions were to walk south until we saw a white marker in the trees and then turn left, and to keep turning left at each marker until we received further instructions.  Looking back, I assume they always knew where we were.  They were just to lazy to come get us.  Essentially, they had us following an inward spiral which terminated at a clearing in the forest. The fort was straight ahead of us in this clearing.
Prior to our flight, we were given details of fake missions, nonexistent technologies, call signs, passwords, and other minutia to memorize. This would be the information that our captors would attempt to extract from us during the interrogations that were almost certain to take place in the days ahead.  The instructors actually used Dale Carnegie memorization techniques to force feed the information to us.